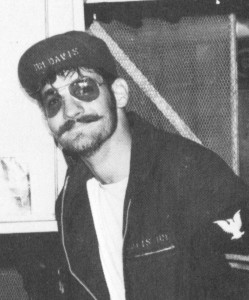 I was flipping trough my Navy photos when I came across this gem — that of the unshaven face of a serious short timer. I’m posing showing the open door of my locker in the engine shop where I kept my tools, geedunks, audio cassettes, etc.

On the inside of the locker door, along with a full page magazine ad for my dream car— a British racing green Triumph Spitfire — was the face of a discarded oil pressure gauge that I had repurposed and labeled with a dymo gun as, “Davis’ Handy-Dandy Short Timers Gauge.” Each day I would decrement the red gauge hand one day closer to my discharge, and then taunt my buddies with it.

Assuming most of us were as anxious to move on as I was, I open up discussion here for stories of how we counted down the days to departure or discharge. Let the fun begin. 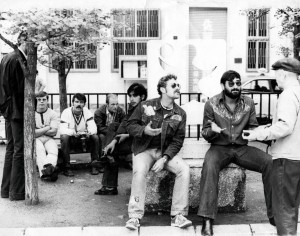 Stand by for heavy rolls!

I was probably more prone to sea-sickness than the average sailor. In my early days aboard Conserver I dreaded getting underway, especially if I knew the seas would be choppy. I know heavy seas affected Conserver more than more streamlined ships like destroyers and larger ships like carriers. Being made for torque, not for speed, Conserver’s breadth and shallow draft created the perfect storm for the equilibrium-challenged.

I remember my first day-trip aboard out of Pearl was for reftra in preparation for our May 1972 Westpac cruise. What I had hoped would be a very pleasant experience — having never been on any substantial floating vessel besides the SS Admiral on the Mississippi River at St. Louis — turned out to be a nightmare. As soon as we hit the moderate seas off Honolulu, I got sick. I had the very uneasy feeling that every underway minute would be like that. I was very pleased to find out later that seas can be calm enough to make underway time quite pleasant indeed.

The absolute worst time I had at sea was on my first Westpac. Were had been in Kaohsiung, Taiwan for a port visit and were getting underway for Hong Kong. I was serving out my mess cooking obligation at the time so I as not standing my usual sea and anchor detail station as B1 Oiler. Instead, that day I was on the fantail enjoying the hustle and bustle of getting underway without any real responsibility.

I don’t remember having knowledge that we were pulling out of port into the middle of a full-fledged typhoon, but that fact could have been transmitted to the entire crew that morning at muster. My first realization that this wouldn’t be a leisurely two-day transit to Hong Kong were the walls of water breaking on the sea wall that protects the harbor. As we approached it, seas got a little rougher, but the instant we cleared the sea wall, the bow shot way up, the fantail dropped way down and my stomach began to churn. When water began to crest the gunnel, I headed for the engine shop.

As I stepped into the shelter of the shop I had to dodge tools and parts that had not been properly stowed. As soon as I stepped on to the mess decks, the stainless steel locker for the trays, cups and eating utensils tipped aft spilling flatware all over the deck. I remember the contents of bug juice machine sloshing back and forth with every roll.

My strongest recollection past that was being confined to my rack with doc coming by and giving me a shot of tranquilizer in the butt. When it was necessary to visit the head, I remember the passageway’s deck slick with puke and having to hold on to anything on the bulkheads just to get from one place to the other.

In calmer seas I do remember standing watch in B1 and throwing up every hour on the hour, often times going to the starboard fantail to throw up over the side and getting a face-full of salt spray. We used to call it, “feeding the fish.”

That trip to Hong Kong took twice as long as a normal transit due to the ship having to take evasive action. Our arrival in that great liberty port was especially sweet after suffering through my first typhoon.

Information on the 1972 typhoon season.

It’s been less than 24 hours since we launched our website. I’m very pleased with the response.

Of the 16 registered users besides me, only two have added any content, Jim Alderson and John Ackerman. I invite all hands to please consider adding a blog post about a memory of issue relevant to the rest of the Conserver community. Here’s how registered users do that:

1. Log in using the Username and Password fields on the right side of the page.
2. The login section will then say Welcome [your username]. Under that you’ll see Dashboard. Click on that.
3. In the far upper left of the page you’ll see Posts. Click on that.
4. Under Posts you’ll see Add new. Click on that.
5. The Post editing interface will open up. Give your post a title and write your piece in the content area.
6. When you’re finished writing, click Submit for Review.

If you’ve ever used a word processor you’ll be able to use the Post interface.

Please don’t edit or change anyone else’s content. If you have a problem with it, use the comment feature in the actual post or contact them or me and we’ll take care of it.

Do not mess with the Comments or Contact sections. You are, however, encouraged to edit your own profile, especially the Biographical Info box. Feel free to change your password any time.

We all look forward to hearing from you.

This is a work in progress!

The look and feel will come together and improve over time.

The success of USSConserver.org depends on the contributions of her crew, family and friends. This is a community project. All hands are encourage to contribute stories, reflections, facts, dates, suggestions and ideas.

Instructions for becoming a contributor are as follows:

Once your account has been approved, you will be able to post on the blog – the home page of the site. Again, the post will be reviewed and approved if appropriate.

If you have any questions about this process, please submit via the Contact page form.

Donations are accepted. Please consider a small non tax deductible contribution to the maintenance of this website. Click the Donate button located at the right.

I look forward to your input.