A campaign was held in 2014 and 2015 to raise money to build this beautiful 26-inch scale model of the USS Conserver. Shipmate Jim Richardson took on the task of directing the details of development, and provided the builder with the most minute detail of the ship based on its state before the first decommissioning. Blueprints and photographs were used as resources to create a stunning physical rendering of the ship. 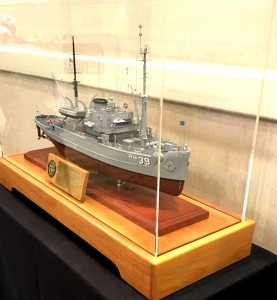 Shipmate Dale Hower handcrafted a wooden base with engraved plaque, a plexiglass display case, and a durable shipping carton to keep it safe in transit. Dale then transported it to the reunion in San Antonio in his vehicle. Dale provided this narrative of at the model’s arrival at the reunion.

I arrived at the hotel around 3 PM. As I was unloading luggage in the front, Mark Benoit happened by. He helped get the crate off the truck and strapped on to the rolling dolly cart I had brought along. I headed for the hospitality suite with the model Thayes and the bellhop headed for our room with luggage in tow.

There was a good crowd in the hospitality suite, Doc Hansen, Craig Leonard, John Ackerman, Kevin Weaver, Lee Samuelson and five or six other shipmates plus assorted wives. I had an audience as I uncrated the model and more help than I needed. I had purposely designed the crate to also act as a pedestal. We draped a table cloth over the crate put her on display. It’s well liked and well photographed. 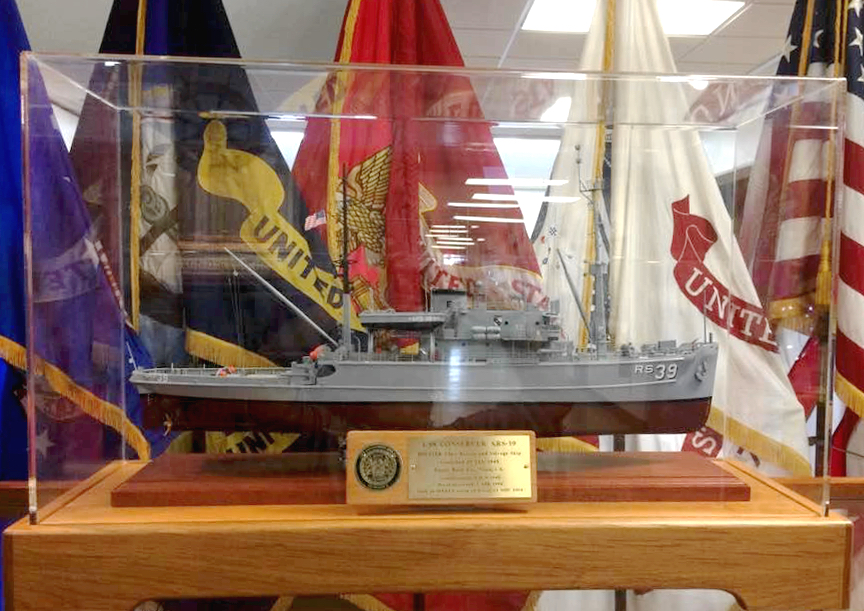 The Conserver model is now on display at its new home on the Quarterdeck at Naval Diving and Salvage Training Center, Panama City, Florida. If you are passing nearby be sure to stop by and check her out. For access to the base, call the Quarterdeck at (850) 234-4651 and ask for an escort.