Letter to the Guys from the USS Conserver ARS-39

I am so glad you saved all the stuff you did from the time on the Conserver. I have always admired your ability to remember things from the past. 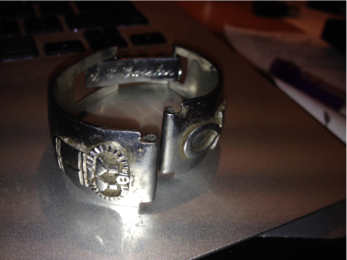 To comment on your post, I think I might be the only one that has a watch band like yours, in fact I remember you and I going together to have them made. I have lost place of the fake Seiko watch that I got in Hong Kong. Wore it for years after the Navy. Still look at it almost every day.

I had the SCUBA tanks on it because even though I was not a Navy Diver (wanted to be) I admired all of them for their skills at such a dangerous task.

The “time in and around Danang Harbor” was also a an event I will never forget. I remember the RED tracer rounds flying on shore as we cruised the coast at night and thinking about the guys behind and in front of them and thinking how freaked out they must be.

When we stayed in port at the dock, the concussion grenades kept waking me up and I still hear them at times when I sleep. I also went ashore in Danang, don’t remember if it was in the party but I remember having to drive around in a pretty beat up old Ford pickup and wondering why the Vietnamese soldiers were driving new ones. The trip to China beach was a highlight of the cruise for some reason. Maybe because it was WAR going on and we were walking around on one of the most beautiful places on earth.

I don’t remember if it was this West PAC or one of the other cruises I was on while aboard the Conserver but I remember some big storms we road out and if i can find them I may have the pictures I took while standing behind the signal flag storage above the Bridge. I would watch the bow dive into blue water and took a picture just before the wave went over my head.

One memory that I have never told anyone is the time I was sitting inside the armory (remember the armory), it was maybe 8 foot square. Any way there were four or five of us sitting around on ammo cases etc. and the gunner was cleaning 45’s as we talked. Well, all of a sudden, BANG!!!!!, the 45 he was cleaning went off. We all froze as we looked around to see if anyone was dead and to our amazement, no one was hit and nothing else went off. Well the officer or maybe it was a Chief that was there (can’t remember who it was) instructed all of us to keep it to ourselves as there was no damage done. I can guarantee all of you that ever since then, whenever I handle a weapon, I FIRST check the chamber to see if it is loaded. Don’t know if anyone ever found the slug. 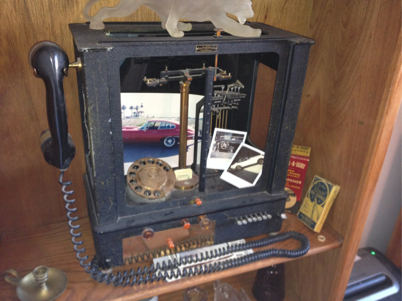 Remember this Telephone I made out of a scale I recovered from the salvage yard in Pearl City? The dial was my first ever machine shop project that I did on the ship. The handset is from the ship and the cord is from an electric guitar. It still works but no one has a land line anymore.

These are some of the only remaining items that I have managed to save. 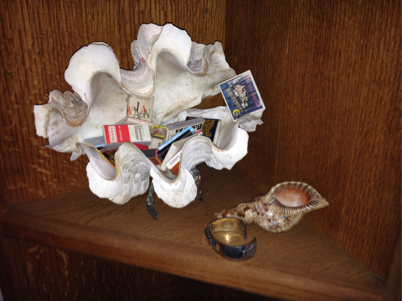 The shells are from the time we all got a chance to dive in the Mindoro Strait. That was a stop I will NOT forget. One of the cooks knew how to cook these clams and we had then for a meal.

The matches in there are from allover from the 4 West Pac cruises I went on.

1 thought on “Watch band to remember!”