I wrote this for the first version of the USS Conserver website over 12 years ago.

Do you own a collection of Navy memorabilia? Do you sometimes wonder why the heck you held onto it for all these years? My wife, bless her heart, has been on my case for 21 years to dispose of the uniforms, white hats, belts (a good 6 inches too short to fit around my 48 year-old waist), and a variety of shipboard paperwork and Westpac souvenirs.

I didn’t know until recently that saving this junk would pay off in a big way. You may or may not agree that seeing some of this stuff on this website is fun and brings back fond memories. I may be providing a small degree of enjoyment for my visitors. Regardless, if I’m the only one who gets a charge of seeing scans of special request chits and bar cards from liberty ports, keeping this stuff on hand for all these years is justified.

How many of you bought one of those custom-made stainless steel watch bands in Subic? How many of you still wear it? I am still wearing mine. I’ve worn it every day since I got it back in 1973, except for maybe a year or two when I was between watches that would fit it. I don’t remember seeing any quite like mine. I chose to not have my rating or any other insignia applied to the band because I just preferred the look. And I guess I was looking ahead to when I was out of the Navy and might have to explain to a perfect stranger what the Engineman’s cog on my watch band meant. Besides, I never was excited about being an Engineman, even though I seemed to enjoy operating and maintaining those big Caterpillar D-399s.

One of the subjects I think about now and then is our time in and around Danang Harbor in the summer of 1972. I remember entering the harbor early in the morning and seeing that waterfall high on the hill off to the starbord side as we steamed into port. We anchored in the harbor by day and got underway every evening after dinner to steam up and down the coast as part of Operation Market Time, trying to intercept gun runners.

I remember long hot days anchored there in that big harbor. I was a mess cook at the time and had a lot of free time during the day between meals. I was fascinated by the jellyfish that drifted by, so much so that I tried to catch them with a makeshift sein. I took a number 10 tin can from the galley trash and punched holes in it with a marlin spike. Then I strung a piece of that orange line used to shoot a mooring line to the pier to the top of the can. Then I’d lower the can over the fantail and pull it up just when a jellyfish floated over it. I remember catching a few of the slimy critters, but even though comissaryman Diego told me jellyfish stew was a Filipino delicacy, I just threw them back into the harbor. 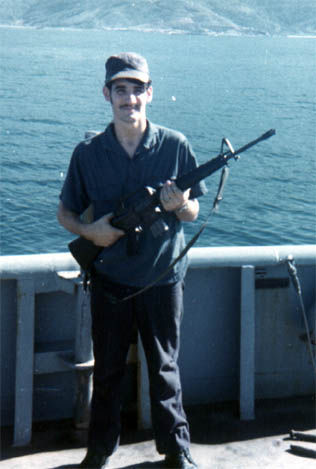 Another recollection I have of Vietnam was the watch we had posted on the weather decks for hostile swimmers. Someone from deck force was assigned the watch to roam the deck with an M-16 looking for saboteurs carrying explosive charges to attach to the hull. None were ever sighted, but I remember some of the watches firing at floating debris. The CO eventually put a stop to that.

On a couple of occasions we tied up to a pier in Danang to take on stores and water. Durning those short periods of time, concussion grenades were dropped over the side every 20 or 30 minutes to discourage swimmers who might wish to put Conserver on the bottom. I remember being in the engine room and being showered with pieces of rust when those concussion grenades were detonated.

I went ashore twice, as I remember. The first time was in Danang to get food stores. Gunner Ralston and some of the divers lead the working party, wearing their greens and carrying 45s or M-16 for protection. To this day I have this strange sense that I could hear projectiles whizzing past my head as if snipers were trying to pick us off.

The other time I went ashore there was at China Beach, outside the harbor, for a little bit of liberty. The work boat took us in and dropped us in jellyfish infested water. I remember being with EN3 Kitchen on the beach for maybe an hour or so. Then we caught a ride to the exchange or possibly just for a drive around the base. While I was riding in the back of this pickup truck, a motorcycle pulled up along side between us and the curb. The passenger on the bike grabbed my watch band and tried to rip it off. I pulled my arm back and the riders immediately went down a narrow alley. It’s strange that I don’t remember if they got my watch or not. I think they did.

After the ride, and it’s funny that I don’t remember where we went or who was driving, we returned to China Beach to meet the work boat for our ride back to the ship. We stopped at a pier on the way and got off the boat for some reason. Later that evening, as we were weighing anchor and getting underway, I was preparing to drag a swab. Unfortunately, I was playing out the line as the Pilot house issued an all back full to the Master Control. The swab and line got caught in the screw and was pulled under. It was a good thing my foot was not fouled in the line or I would have gone under, too.

One of the few times we tied up to the pier in Danang, we got a call to get underway immediately to assist the USS Lang which was dead in the water in the Gulf of Tonkin. It was mid-afternoon when we got underway. The next morning at sunrise I went to the fantail to see what seemed like a hundred ships there. I was over-come with amazement by the sight of the force those ships represented. I was impressed to see so many ships, not only in one place, but underway and operating together. I would love to have been part of such a task force. Meanwhile, the Lang, underway on one engine, beat us into Subic by a half a day.

2 thoughts on “Cruise Memorabilia and Memories of Danang”